CHECK OUT THIS THRILLER ON AMAZON!!

A THRILLER ABOUT HIGH STAKES FINANCE!

CHECK OUT THIS THRILLER AT SMASHWORDS!!

“The Synod” Can Also Be Purchased At Other Book Stores, Including Barnes & Noble, Apple iBooks, Kobo and Elsewhere!!

NEW!! GET DISCOUNTS ON LOCAL SERVICES YOU NEED, FROM PLUMBING TO HOUSE CLEANING! (USA ONLY)

ALL BLOG POSTS AND OTHER MATERIALS ON THIS WEBSITE ARE INTELLECTUAL PROPERTY OWNED BY AVERY B. GOODMAN AND PROTECTED UNDER US AND INTERNATIONAL COPYRIGHT LAWS. ALL RIGHTS RESERVED! No material may be copied or republished without the express written permission of the copyright owner. You may, however, copy up to the first 400 words from any article or blog post, without advance written permission, and repost it on your website. If you take this option, you must include a hyperlink back to the entire article at the end of the portion you republish. We are a participant in the Amazon Services LLC Associates Program, an affiliate advertising program designed to provide a means for us to earn fees by linking to Amazon.com and affiliated sites. We also have affiliation agreements with other companies, such as Ratuken, Apple, EBay, Walmart and a number of other companies. Clicking a hyperlink to an affiliate may result in compensation to the website owner to help support the work we do. 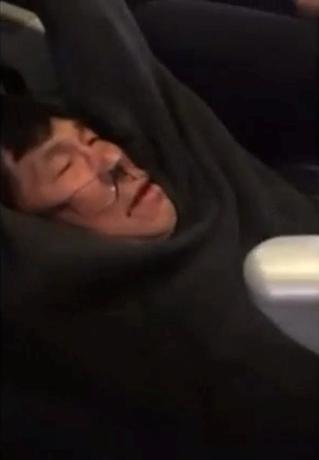 Over the past few days, the media has been very busy discussing the rights of airline passengers. After deploring the abuses of airlines, most commentators end up saying that passengers have no rights, but have a duty “to comply with orders given by the airline.” Presumably, therefore, when Dr. David Dao was ordered to give his seat to a United Airlines employee traveling standby, the simple act of refusal was some sort of de-facto violation.

Numerous regulations have been passed into law that give airline employees the right and authority to regulate the cabin. That is part of the reason so many otherwise intelligent people seem to have such a deep misunderstanding of passenger rights. The idea that passengers must comply with all orders from the airline is false. Suppose the airline cabin crew orders passengers to disembark from the aircraft at 8,000 feet in mid-flight? Passengers need not comply with a deadly order. Suppose the crew decides it will take the risk of being jailed later, in order to rape an attractive female passenger? Again, passengers need not comply.

Both examples are events that seem so unlikely to happen that they also seem ridiculous. The point is not to show the plausibility of such events actually happening. The point is simply to prove that passenger compliance does not extend to unreasonable requests that are unrelated to safety. Airline actions must be lawful, reasonable and designed to insure safety and security before passengers have any duty to comply.

As many of you already know, on April 10, 2017, United Airlines violently evicted a Kentucky physician by the name of David Dao from his seat on a flight between Chicago and Louisville, Kentucky. This happened in spite of the fact that he had already been boarded and seated, and the persons to whom he was forced to surrender his seat were airline employees flying standby, who were not on the original passenger manifest.

United Airlines sought to replace this paying passenger with its employees because it wanted to transfer them to the destination airport. They were needed there for purposes of handling another flight. After requesting volunteers and upping the offered compensation to $800, not enough people agreed to give up their seats. Part of the reason for this was that the next available United flight was in the afternoon of the next day, and the airline made no attempt to offer alternative land transportation (it is only 5 hours driving time between the two cities).

In spite of the fact that there is no upper limit to the amount an airline can pay to a passenger who voluntarily gives up his seat, United seems to have chosen not to raise the compensation offer above $800. Nor, apparently, did they chose to pay for a flight on another airline, offer to transport afflicted passengers or their own employees by car. Instead, the airline capriciously chose 4 passengers with valid reservations for removal. In spite of the fact that they had all already been boarded onto the aircraft, and given seat assignments, the airline demanded that they give up their seats. Dr. Dao steadfastly refused to cooperate.

Faced with his refusal, the airline called in the Chicago Aviation Authority police. The police arrived, apparently without bothering to do any review of the legality of what they were being asked to do. Upon arrival, passenger videos showed them in the role of thugs, clothed in uniforms, using physical force to remove a 69 year old man, and in the process bloodying his face, knocking him unconscious and carrying him out of the plane.

Neither federal regulations nor United’s own self-serving “contract of carriage” confers any right to remove a reserved paying passenger from a plane once he has a seat assignment. 14 CFR 250.2a, the federal regulation that gives airlines the right to refuse to board a passenger, applies to situations in which the plane is overbooked, where an airline seeks to “deny boarding” In this case, the plane was not overbooked. There were enough seats for all paying passengers. Only the last minute desire of United Airlines to prioritize the transportation of its own employees caused the trouble.

The employees, as noted above, were not on the original passenger manifest. They were flying standby and, unlike the paying passengers, already on board, they had no reservations. In spite of that, in order to maximize profits, United wanted them to be transferred quickly to another airport. Apparently, in the company’s eagerness to carry out its desires, the fact that all passengers had already been boarded, and that United no longer had the legal right to “deny boarding” was ignored.

14 CFR § 250.3(a) covers boarding priority rules. It requires every carrier to establish priority rules and criteria for determining which passengers holding confirmed reserved space can be denied boarding on an oversold flight in favor of others. The key is that the priority rules apply only to passengers holding confirmed reserved space! The regulation specifically prohibits airlines from creating rules and criteria that “make, give, or cause any undue or unreasonable preference or advantage to any particular person or subject any particular person to any unjust or unreasonable prejudice or disadvantage in any respect whatsoever.”

In this case, instead of adhering to the law, United capriciously gave an illegal super-priority to its own employees who were traveling standby. That was an illegal act in violation of the air travel regulations. But, it gets a lot worse, because this case involves criminal harm against the body of another.

An assault is any unlawful attempt or offer to do bodily harm to another, whether from ill will or extreme carelessness. When the threatened injury is actually inflicted, it amounts to battery. United Airlines, its employees and the Chicago Aviation Authority Police threatened violence against Dr. Dao and then committed the violence. We are left with only one remaining question. Was the force and violence lawful or unlawful?

Reasonable force or violence can be used when it is necessary to perform a legal duty. Thus, a police officer can use force to catch a criminal. Restaurants, nightclubs and airlines can use reasonable force to remove persons who disturb other patrons. In this case, however, the patron was not a criminal. Nor was he causing a disruption or endangering the flight. He was simply sitting in the seat. That seat had been assigned to him during boarding. His guilt was in declining to give away his seat for the airline’s convenience. Thus, the force and violence used against him was unlawful.

As you can see, there is no doubt that United Airlines, its employees, and the Chicago Aviation Authority committed an unlawful assault and battery when they removed Dr. David Dao from his seat. If a regular person did what they did to this man, there would be no question that he would be prosecuted. Why, then, is there no talk of prosecuting this corporation and its guilty employees? They committed an unlawful act of violence upon an innocent passenger.

Some may see my point as “overkill” or “mean spiritness”. After all, many will argue, the man is free to bring a civil lawsuit, and is already in the process of doing so. He’ll get millions in damages. What more do you want?  The problem is that the money will, ultimately, come from United’s shareholders. It won’t come from the pockets of those who committed the acts of violence and/or put in place policies that would inevitably result in the crime. Shareholders, perhaps, as theoretical “owners” of the company, must face some liability, but they are not directly at fault. Civil liability, alone, leaves direct wrongdoers without sufficient punishment.

Will this company face prosecution? Probably not. Prosecution requires a prosecutor with knowledge of aviation regulations who is also willing to put his career on the line. Although United is unpopular now, it still has powerful connections that will come out of the woodwork once the initial furor subsides. Beyond that, few public prosecutors have any understanding of aviation regulations. Fewer still will bother to look them up even though most are perfectly capable of doing so. Most will simply continue to assume that United and the Chicago Aviation Authority have a legal right to evict passengers.

We can only hope that a courageous prosecutor will take this case and pursue it to a conviction against United Airlines, its guilty employees and the officers involved. In the meantime, send a link to this posting to everyone you know. The more people read it, the more likely it is that people will, at least, join the boycott. It may even stimulate some prosecutor to take the case. It is our duty, as honorable men and women, to boycott United Airlines by choosing other carriers for our flights. If enough people join in boycotting this outrageous airline, it will suffer economic damage serious enough to serve as an example to others in the future.

THIS IS THE NOVEL THE INTERNATIONAL BANKSTERS DON’T WANT YOU TO READ!

The Synod is a conspiracy of 8 large international banks who seek to control gold, stock, bond and commodity markets all over the world. Jack Severs runs for his life when he learns too much, as the most sophisticated surveillance system ever built is deployed to track him down. As the ever-tightening noose closes, he struggles to uncover evidence to save himself and his world from collapsing! An exciting, fictional, fun and educational thriller about the banking cartel. Learn about the methods used to manage the price of gold and every other market on the planet, and how this affects business, politics and daily life in both the fictional and real worlds.